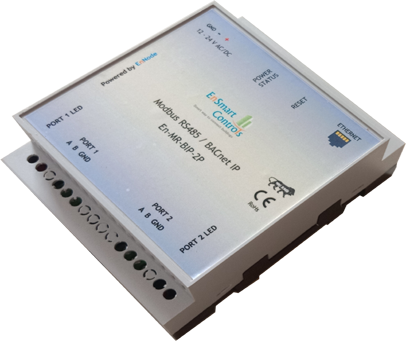 The Ensmart gateway is implemented at the edge of a network and manages all data that is directed internally or externally from that network. When one network wants to communicate with another, the data packet is passed to the gateway and then routed to the destination through the most efficient path.

In addition to routing data, a gateway will also store information about the host network’s internal paths and the paths of any additional networks that are encountered. It may also translate data received from outside networks into a format or protocol recognized by devices within the internal network.

All networks have a boundary that limits communication to devices that are directly connected to it. Due to this, if a network wants to communicate with devices, nodes or networks outside of that boundary, they require the functionality of a gateway.

A gateway is often characterized as being the combination of a router and a modem. Gateways are basically protocol converters, facilitating compatibility between two protocols and operating on any layer of the open systems interconnection (OSI) model.

Bidirectional Gateways: They permit data to stream in two directions. They can be utilized as synchronization devices.

IoT gateways provide the widest multi-protocol support in the industry by far, seamlessly connecting devices and systems in even the most complex integration projects.

Based on the analysed report, guidance would be proposed to the management for the energy efficiency and cost reduction.

We monitor, analyze and manage the Energy Consumption